Talking with Dr. Steven Goldfarb from the CERN ATLAS 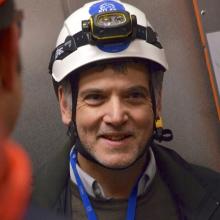 On September 25, 2019, Dr. Steven Goldfarb from the CERN ATLAS experiment gave PRISMS an unprecedented look at the inner workings of a 7,000,000 kg particle physics detector. During his talk, Dr. Goldfarb detailed both the physics and mechanics required to search for fundamental particles like the Higgs boson, the potential of extra dimensions, and the composition of dark matter. Since 2012, the ATLAS experiment has enlisted the help of over 3000 scientists worldwide, from over 174 institutions in 38 countries, making it a truly international endeavour.